Brock's Monument was initially built in the 1820s and Brock's remains were moved from Fort George to the base of the monument along with those of Lieutenant-Colonel John Macdonell. After the monument was partially destroyed by an explosive attack, Brock's and Macdonell's remains were temporarily relocated and a second larger monument was built. The current monument was opened in 1859 and is operated by the Friends of Fort George.
Inscriptions
Second monument erected in memory of General Sir Issac Brock.
Sujet(s)
Monuments
Langage de l'élément
English
Couverture géographique
Déclaration de droit d'auteur
Copyright status unknown. Responsibility for determining the copyright status and any use rests exclusively with the user.
Contacter
St. Catharines Public Library
Courriel:special.collections@stcatharines.library.on.ca
Adresse Internet:
http://www.stcatharines.library.on.ca
Adresse postale d'agence
54 Church St.
St. Catharines, ON L2R7K2
905-688-6103 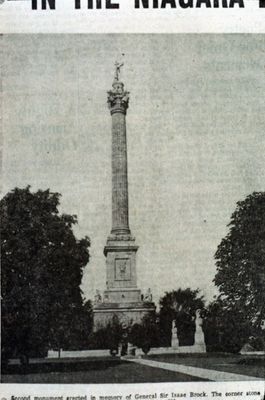