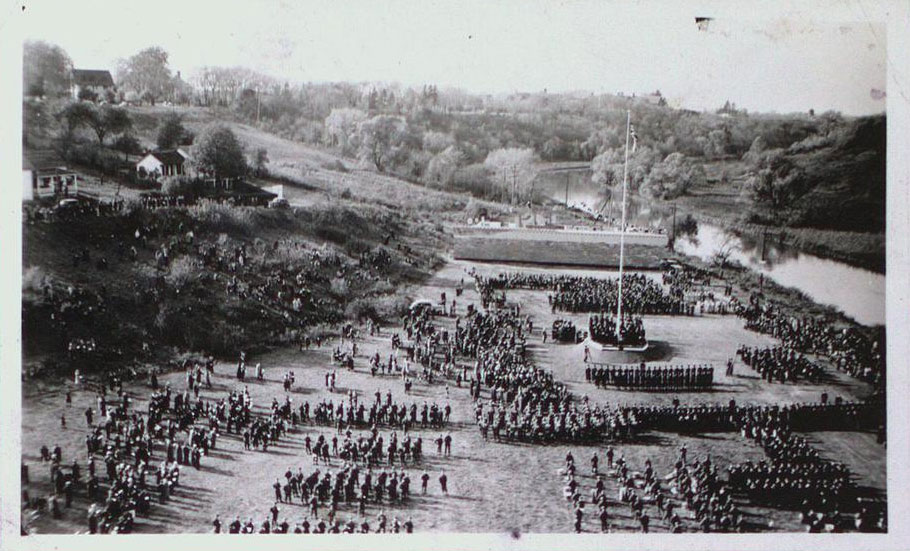 In 1895, in response to growing unrest in Europe, Britain created the Navy League, a society with local branches in cities and towns. The Navy League was supported by people who were interested in protecting maritime trade and defense. Canada’s first Navy League Branch was established in Toronto in December of 1895. In the early years, Canadian Branches of the Navy League trained young men to encourage them towards a naval career. After World War 1, the training corps program became known as the Boy’s Naval Brigade.

In St. Catharines, the Royal Canadian Sea Cadet Corps Renown began in 1921, when a group of interested citizens organized a movement to train local boys as cadets. The corps began as the Boys’ Naval Brigade under the sponsorship of the Ontario Division of the Navy League of Canada. In 1931, their name changed to the St. Catharines Sea Cadets and later, the corps was named “Renown” after the famous British battleship H.M.S. “Renown”.

In 1940 the Kinsman Club arranged with the Navy League to sponsor the cadet corps. The current quarters of the cadets at the Armoury proved to be inadequate and they began searching for a new location. A suitable building could not be found and the city was asked to help find a good location to build a new home. Land beside the old Welland Canal and underneath the Burgoyne Bridge was selected and leased by the City of St. Catharines to the Kinsmen Club of St. Catharines, the Sea Cadets of St. Catharines and the Navy League of Canada for $1.00.

Construction of the sea cadet’s new headquarters began in May of 1941. Members of the Kinsmen club as well as various other community members all pitched in to help construct the new building. It was officially opened by the Lieutenant-Governor of Ontario, Honorable Albert Mathews, on October 26, 1941.

In the years following World War 2, the number of cadets declined, though training reached a higher standard than ever before. By 1956, there were only 27 cadets in the program. In response to this, the corps aimed to build another new headquarters with the hopes of increasing its numbers. On May 17, 1958, RCSCC Renown - MacBeth Hall, named after the architect who designed it, opened.

In 1978, the Navy League transferred the property to the city of St. Catharines and the building was leased to the Lion’s Club who helped run the hall and maintain the building. In 1985, the decision was made to demolish the original 1941 portions of Renown Hall to make way for the construction of a new, $330,000 building. Two years later, only part of the hall had been built. The work had been started with a government grant and funding from the city of St. Catharines. The hope had been to have the rest of the money come from outside donations. That money did not come in and Renown Hall was closed. The cadets continued to meet, training first in the Royal Canadian Legion Branch 24 building and then at 111 Church Street. The cadets disbanded in 2002 due to low numbers, the loss of their meeting space, and a lack of community sponsorship.