Note the spelling of Queenston as Queenstown.

Brock's Monument was initially built in the 1820s and his remains were moved from Fort George to the base of the monument along with those of Lieutenant-Colonel John Macdonell. After the monument was partially destroyed by an explosive attack, Brock and Macdonell's remains were temporarily relocated and a second larger monument was built. The current monument was opened in 1859 and is operated by the Friends of Fort George.
Inscriptions
Brock's Monument, Queenstown Heights, Ont.
Date of Original
c1915
Dimensions
Width: 8.6 cm
Height: 13.6 cm 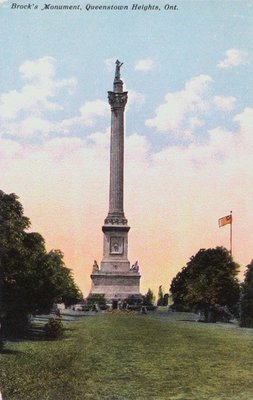