Animators in period uniform portray everyday life in the British Military post of nearly two centuries ago, bringing the post into focus for visitors. Included in the photos are the Fife and Drum corps, a member of the Royal Artillery and two of the three blockhouses.

Photographs in cooperation with the Friends of Fort George. Postcard was sent with an invitation to attend the 1994 season "welcome" wine and cheese on the back.

Fort George was built in 1796 after the British left Fort Niagara in response to Jay's Treaty of 1794. The treaty stated the British had to leave fortifications on American soil. The Fort was destroyed in a bombardment on May 25, 1813 by the Americans during the War of 1812, only the Powder Magazine remained. It was later abandoned by the British when they built Fort Mississauga closer to the mouth of the Niagara River. The Fort was rebuilt in the late 1930s as a make work project during the Great Depression. The Fort is now opened to visitors and maintains the image of a Fort during the early 1800s.
Publisher
Dexter Colour Canada
Place of Publication
Cornwall, Ontario
Date of Original
c1994
Dimensions
Width: 14.9 cm
Height: 10.2 cm 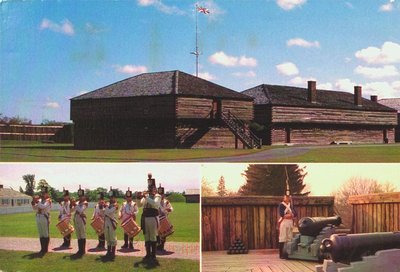